Dyspraxia, also known as developmental coordination disorder (DCD), is a common disorder of childhood affecting fine and/or gross motor coordination in children and adults. It is a lifelong condition and is formally recognised by international organsations including the World Health Organisation. Whilst DCD/dyspraxia is primarily a motor disorder, many individuals may also experience difficulties with memory, perception and processing along with poor planning, organisation and sequencing skills which can have a significant negative impact on everyday activities. It can also affect articulation and speech.

This year the Dyspraxia Foundation which is the only National Charity devoted to raising awareness of the condition is focusing on employment.

Around 3% of the adult population are affected, but poor awareness and limited support mean that many adults with dyspraxia have experienced discrimination or difficulties in the workplace. As a result, employers and organisations are not benefitting from the unique skills and perspectives that employees with dyspraxia have to offer.

On Tuesday 18th October we joined together in London to celebrate Dyspraxia/DCD. The event attended by a wide variety of talented people with Dyspraxia, including Jamie Lambert from Collabro, classical singer Stephanie Guidera and a number of members from our Dyspraxia Youth Group.
Ten members of the youth team appear in our brand new Dyspraxia Awareness Video - 'Dyspraxia Youth Speaks' which premiered on the night and can be viewed below. This video was recorded and edited entirely by our youth group, please watch and share and spread the word of #Dyspraxia.

Dyspraxia Foundation Trustee, Jonathan Levy tells us about his working life as a young man with dyspraxia/DCD #dyspraxiaweek

Dyspraxia Foundation working with Acas on neurodiversity in the workplace

Need advice about dyspraxia and employment?

Due to a declining membership and with current funding coming to an end, we launch an urgent campaign to raise funds to ensure our services continue until we are able to secure long term sustainable funding. Without your continued support we will be unable to continue to raise awareness and help friends, family and those with dyspraxia.

Text DYSX16 (space) £5 or £10 to 70070
to donate to Dyspraxia Foundation and make a difference today. JustTextGiving by Vodafone.

Use our PayPal Donate button (below) to donate for fundraising initiatives or to make donations to the Dyspraxia Foundation.

Become a member - includes free book when you join in October!

Dyspraxia/DCD Through the Ages Conference 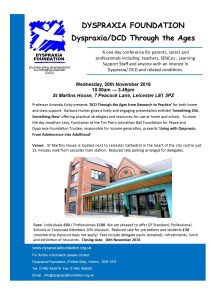 Join us for a full days conference for parents, professionals and anyone with an interest in dyspraxia/DCD, either personally or professionally (or both!)

Learn about ‘DCD Through the Ages from Research to Practice ‘ with Professor Amanda Kirby, explore practical strategies and resources with Barbara Hunter with her lively ‘Something Old, Something New’ presentation and hear about ‘Living with Dyspraxia: From Adolescence to  Adulthood’  with Jonathan Levy, who relives his experiences as a young adult with dyspraxia/DCD.

Tickets start from £60. Members of the foundation receive a 10% discount. Fee's include delegate packs, refreshments and lunch!